A very early goal from Clint Dempsey and a very late goal from John Brookes Junior won the United States of America their first match of the 2014 World Cup in Brazil.

Jurgen Klinsmann’s side could not have started better, after just 29 seconds they were ahead. USA burst forward through Clint Dempsey who darted past John Boye with a tidy nutmeg, taking one more touch and then firing low and hard past Adam Kwarasey in off the post.

It was the fifth fastest goal in World Cup history, 19 seconds slower than Hakan Suker’s strike for Turkey in 2002.

Ghana leveled eight minutes before the end thanks to Andre Ayew scoring with the outside of his boot following a Sulley Muntari set-up with a cheeky back heel.

John Brookes Junior scored the dramatic late winner with a powerful downward header with four minutes left on the clock. The German born defender with his first International goal to send USA level on points with his native country in Group E.

USA were dealt a blow after twenty minutes though when Jozy Altidore was stretchered off with a strained left hamstring he picked up while running that put the rest of his tournament in serious doubt.

Goalscorer Dempsey was clattered soon after – taking a boot to the face – a nosebleed followed but, unlike Altidore, could carry on. 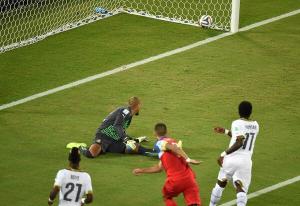 Just before that however Ghana started to threaten, first Christian Atsu curled wide and then Asamoah Gyan stung the palms of Tim Howard with a shot from long range on 32 minutes that Everton stopper did well to keep out

The second half started how the first finished – with Ghana on the front foot. Muntari wasn’t far off with a powerful drive and Gyan headed over soon after.

Gyan was largely wasteful throughout, screwing another chance wide on the hour mark.

The Black Stars will feel a slight sense of misfortune at full time as they had 21 shots to America’s eight but they just were not clinical enough and were duly punished.

America meanwhile go into a crucial match against Portugal knowing they are capable of winning games without particularly playing well and may take confidence from the 2002 in South Korea/Japan where they overcame Portugal’s so called “Golden Generation 3-2. A side that included the likes of Luis Figo, Rui Costa and Sergio Conceicao.